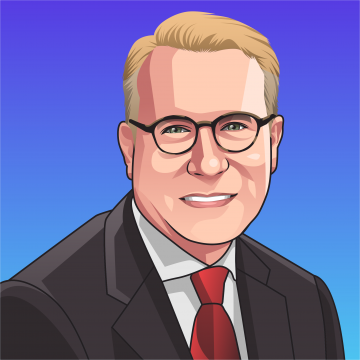 Mr. Anderson was formally trained on Wall Street as an Underwriter. During his career in the Fortune 500 Financial Services Sector, he rose to management positions with $25MM in underwriting authority.
Starting his own investment banking firm in 1998, Mr. Anderson has been exposed or involved in most aspects of corporate finance including, underwriting, private equity, venture capital, mergers, acquisitions, mutual fund development and management, board development, business plan development, strategic planning, road show and promotion, IPO and ICO. He has raised hundreds of millions in private equity and worked on transactions exceeding a billion. He has been interviewed and broadcast nationally and internationally, many times as an expert both on NASDAQ and at the NYSE. Prior to his work in corporate finance, Mr. Anderson served in the U.S. Marine Corps, including the elite Marine Reconnaissance Battalion. He held a Top-Secret clearance and also served operationally in the U.S. State Department at American Embassies overseas and at the U.N. in New York.
At Mr. Anderson’s request the following individuals accepted board seats with his company or clients:
President of Micro Soft, COO of Boeing, Director of the CIA, U.S. Secretary of Agriculture, U.S. Deputy Defense Secretary, President of Texas A&M, Co-Founder of Carlyle Group, Co-Founder Tommy Bahama, Minister of Agriculture Taiwan, Director General of Rural Development PRC, Vice Minister of Agriculture Russia, Chief of Cancer Surgery Sloan Kettering, Co-Founder Costco, Jackie Chan.

All Sessions by Douglas Anderson