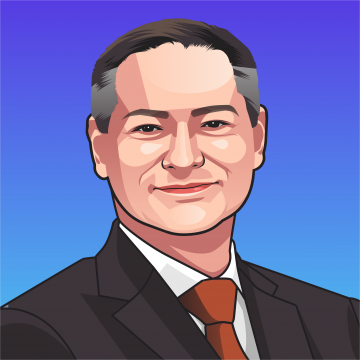 Jochen Ressel comes from Mariazell in Upper Styria (Austria), graduated from the College for Communication Design and worked as an advertising entrepreneur before he was responsible for marketing in the global Esselte Group, initially for Austria (Bene office supplies), then for Switzerland and finally in the HQ in London. As Business Coordination Manager at Triple-A Aqua Service Holding, he was subsequently responsible for building up the water cooler market in Austria. Before starting as Managing Director of the business club k47 in 2008, he worked
in the international client service management team of the European-wide active agency group PPI United / Silberball, in which he held the position as Senior Consultant for brand management and communication planning as well as Head of Operations. After his involvement in k47, he started working as a project manager with the Senate of Economy and was responsible for the subject areas compliance, education, innovation & technology, social entrepreneurship and various event formats. Together with the former Vice Chancellor of the Republic of Austria, Dr. Erhard Busek, he founded the EUROPEAN ECONOMIC DANUBE FORUM and in this context also assumed project responsibility for the “SECI-Southeast European Cooperative Initiative”, a project under the
umbrella of the OSCE. At the same time, he continued the business networking platform he founded in k47 under the name “Business-klub-Jochen Ressel”. In 2015, he worked for BÖSMÜLLER Print Management, a company that specializes in the production of premium print products and packaging. He was active in the areas sales, quality management, special projects and strategy, before taking up the position as the Executive Director-Operations with the Senate of Economy in April 2016, where he was responsible for the content of all senate activities and communicative implementations. In addition he moderated business talks, press conferences, business conventions and award ceremonies. Additionally, he was also responsible for publishing political proposal papers, including discussing them with decision-makers in politics. He was also editor-in-chief of the business magazine Senate. From 2016 to February 2020, Jochen Ressel was also responsible for the communication activities of the CRC-Center for Risk & Crisis Management.

All Sessions by Jochen Ressel