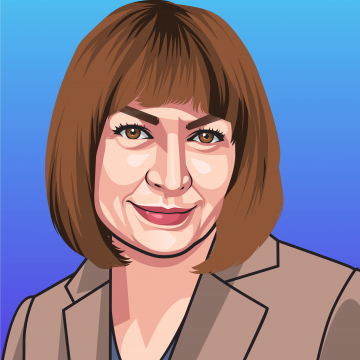 Dr. Mihaela Ulieru is a technology alchemist and is an innovator at the edge of the impossible. She is founder and President of the IMPACT Institute for the Digital Economy (IMPACT stands for ” Innovation Management and Policy Accelerated with Communication Technologies”), which she founded as a consulting arm of her work aiming at policy reforms for the adoption of the latest digital technologies in all areas of society and sectors of the economy. Since her early career she kept inspiring and supporting young entrepreneurs – one of her first MSc students was Garret Camp, co-founder of Uber and StumbleUpon – and she currently advises several startups aiming to put the “Fourth Industrial Revolution” technologies (AI, Blockchain, IoT) to work to make the world a better place.

Among these, most notable are Endor.com which is an MIT powered Artificial Intelligence engine for “the 99%” at 1% of the cost; Sapien.network which aims to build a fair Facebook using Blockchain; Esprezzo.io which enables easy deployment of Blockchain applications, Snakt.com which will put You-Tube on Blockchain to reward fairly all contributors, RedPen, a “wisdom” engine which aims to help us from drowning in the tsunami of information by consolidating news and public opinion capturing what the Internet thinks, feels and says “CommonWealth Resilience 4.0 a social networking platform aiming to reduce losses during a disaster by seamlessly connecting those who need help with those who can help, and FreedomX which aims to eradicate homelessness through economic inclusion.”

Dr. Ulieru is a world traveler to promote the advantages of leveraging Blockchain and its potential to create equality and a fairer society through the inclusion of the 99% in the economy and she advocated successfully at the World Economic Forum for the inclusion of Blockchain among the Top 10 future and emerging technologies in 2016. Dr. Ulieru has been involved with major multi-stakeholder programs leading the scaling-up of operations through strategic partnerships and networks in Industrial Informatics, the Future of Medicine, Self-Organizing Security, the EnergyWeb, Global Manufacturing Systems, and Sustainable Personal Living Technologies. She has authored over 200 scientific articles, works on several Boards and Councils and still has time to write poetry

All Sessions by Dr. Mihaela Ulieru